I can’t believe I have only had my filly, Alaska, for one week! I have been having so much fun working with her. At first, I was pretty happy just to walk up and pet her with out her bolting. She quickly settled in and now is happy for me to approach and constantly follows me while I clean her pen. She is a bold filly, eager to go for walks out of the round pen, and never does the “baby chewing face” when meeting our other horses. If you’ve never seen the “baby chewing face” I assure you it is rediculous. It pretty much tells other horses that the baby is not a threat. Anyway, I have been working on leading her over new things. She is super curious and loves to check out the poles on the ground and gets distracted by the grass when leading her over them. My dad dropped off a dump load of wood chips a couple days ago so I decided the mound would be a great challenge to test the filly’s courage and trust in me, not to mention her agility. She approached it stoically, but then wavered a bit, so I waited until she had thoroughly sniffed it and lost interest, focusing on my sister in the round pen with her filly. I encouraged her forward to the top of the pile and she bounded over trotting down the other side. No problem. We have also been working on picking up her feet, and getting her used to things on her back, like my jacket, but I think Alaska’s favorite part of the week was playing with brushes! I was trying to get her used to a brush by letting her smell it, but it apparently looked like a toy because she grabbed it and threw it! Several times! Silly Filly! Last night, we trotted for the first time while leading, on purpose. She is learning so quickly! Here is a link to a video of Alaska’s first week at her new home➡ Alaska week one

Back in November, Meefy, started training a two year old pony named Chica Linda. She had been running wild with a herd of ponies and had not been touched by humans…ever!  Meefy and Mom had to do a lot of work to be able to touch her and get a halter on her. They have done so well and this week Meefy was able to lead her outside the round pen.

On Saturday, Dad, Mom, Meefy and I loaded up the trailer with four horses to go trail riding. The plan was to take Iroquois (paint), Pip (new Arab), Echo ( Arab) and Meefy’s Appy, Miranda. But, then we would have had to make two trips with our 3 horse trailer.  We took out the tack room in the back so a smaller horse and a pony that got along could squeeze in and ride together. So plan B was to take Iroquois, Pip, Ty (Arab\Appy)  and Sundance (project pony) and put Ty and Sundance in the last stall. Unfortunately, they must have had a tiff in the field because Ty was in a very sour mood. On to plan C,  bring the original 4  we had planned on and make two trips …we thought. So we went out to get Echo and Miranda but they took off running to the back of their 10 acre field. Apparently, they heard we were going to work on crossing water.  Meanwhile, Abu, Dad’s 25 year old retired endurance horse was following us around as we chased the other horses. So plan D take Iroquois, Pip, Abu and Sundance. Once we were finally on the trail, everything went smoothly. It was Dad’s first time riding Pip on the trail and they did amazing.  It was Sundance’s first time on the trail and he did great. He even led part of the way!  The only part Sundance and Iroquois didn’t like was a forty foot puddle that had ice on It. I had to ride Abu back in the puddle and they eventually got in. It was an awesome ride and it was gorgeous when we got to a clearing and saw a inches of frost glistening on the bushes and trees. 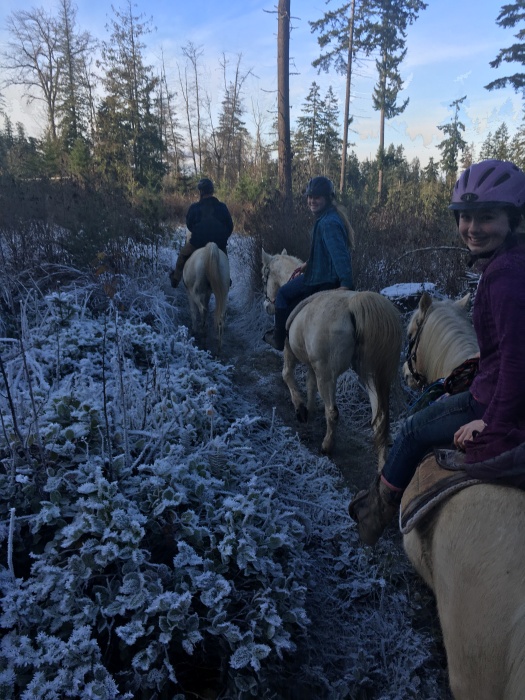